The Gig Economy Is Up for Grabs

Two panels, two presentations, one fireside chat and one packed house at Two Sigma Ventures. That was our Tuesday at The Future of Insurance and the Gig Economy event. We started getting ready the day before with our traditional Ice Breakers email that was sent out to attendees. And to make sure everyone was in a good mood, we kicked off the event with a stand-up comedian.

Packed house today for The Future of Insurance and The Gig Economy with @cakeandarrow & @coveragerinc! Excited to kick off the morning with a surprise stand-up set from @katiehannigan and host @ShefiBenHutta, @avibenhutta, @ChristinaOnUX & others today! pic.twitter.com/PJGxad9tte

We’ve been working with Cake & Arrow for some time. When we saw their latest work around the gig economy, we thought it would be great to put up a breakfast event to talk about the challenges and opportunities presented by the gig economy. And with that in mind, we reached out to participants from companies with gig experience: (1) AIG, which recently launched Canada’s first on-demand travel insurance. (2) MetLife, one of the first insurers to offer a complete rideshare coverage for Lyft drivers. (3) ProSight Specialty, which recently launched ProSight Direct, an online portal that offers insurance on-demand. (4) AP Intego, which now offers pay-as-you-go workers’ comp insurance via Oyster. (5) Hyr, a mobile app that connects gig workers with restaurants and bars. (6) AND CO, an invoicing and payment platform for freelancers, now owned by Fiverr. (7) Painless1099, a hub for self-employment benefits. In addition, we invited Sarah Kessler, Reporter and Managing Editor at Quartz at Work and the author of Gigged: The End of the Job and the Future of Work, and Douglas Cameron, Chief Creative Officer & Chief Strategy Officer of DCX Accelerator Growth, Fiverr’s global ad agency of record.

After listening to Jeff Rutledge, Mick Noland, Darryl Siry and Matan Slagter, there’s no doubt that AIG, MetLife and ProSight Specialty are fully committed to offering suitable products for the gig economy. But, it will take time, and it will take a lot of work.

“Our products for the most part are hundreds of years old – so we have a lot of work to do to really reinvision the product from a customer perspective” – Mick Noland @MetLife pic.twitter.com/X4bXfZrhGZ

But that’s not why we came here. Insurers adapting to new demands is a must, and if they don’t, they’ll simply stay behind. We came here because we believe the gig economy presents an opportunity for insurers to lead the way. To quote Christina Goldschmidt…

Not long ago, I was under the impression that the gig economy revolves around Uber and Airbnb. Then, I learned about Hyr, an app that connects restaurants and bars with gig workers. Hyr, serves an industry that in 2016 provided over 3.2 million server jobs (bartenders, waiters & waitresses) according to the Bureau of Labor and Statistics. For comparison, in 2016, there were 305,100 cab driver jobs in the US according to the Bureau of Labor and Statistics. The gig economy goes way beyond a number of select platforms, and it’s growing. 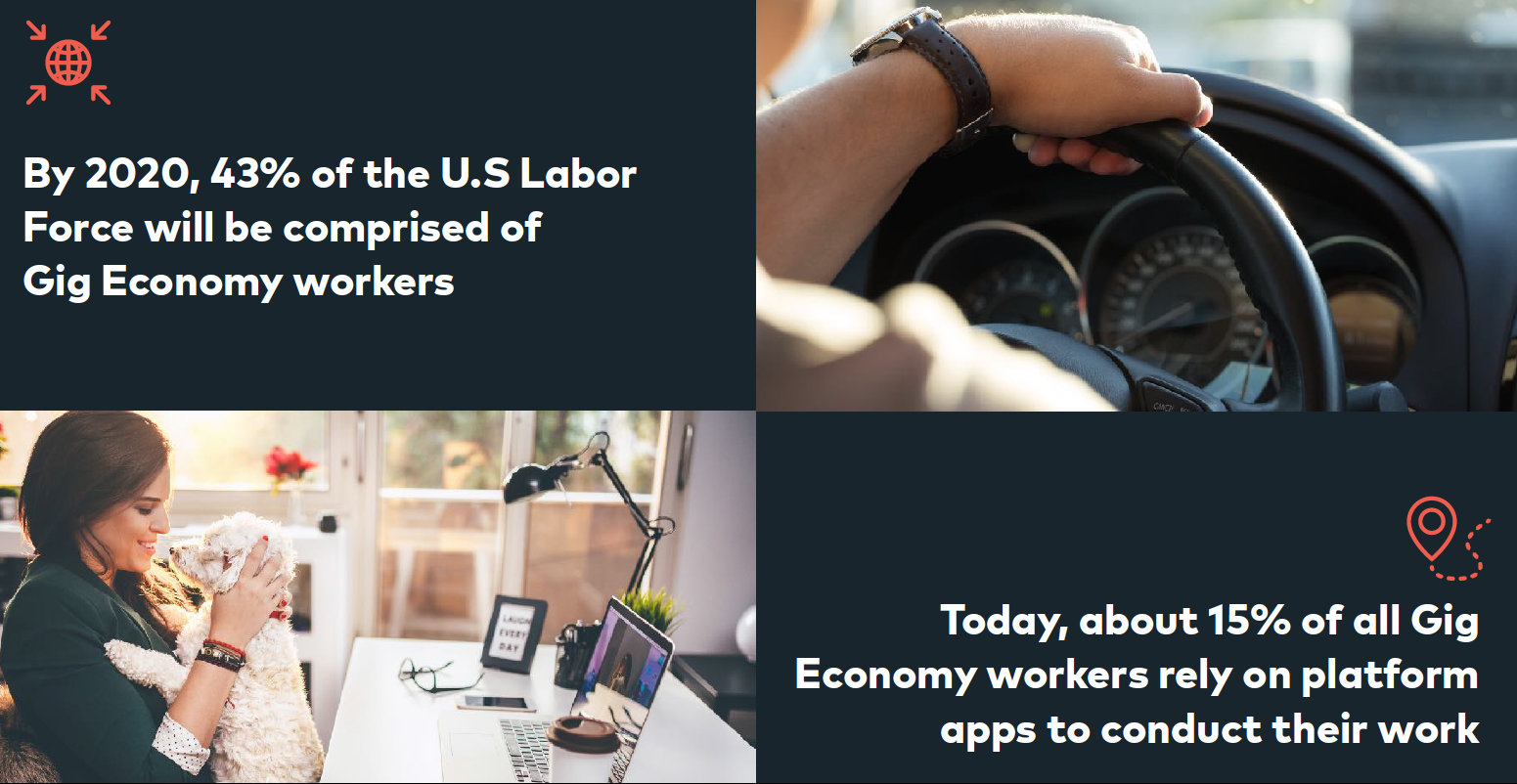 Let’s get back to the ark. Hyr, Painless1099 and AND CO all serve a unique purpose. If there was a flood and Noah was here to save the gig economy, they would all be in the ark. Now, let’s play pretend and say that an insurer built an ark for the gig economy, but instead of calling it an ark, we’ll call it a platform. In that platform, gig economy workers will have everything they need to manage their business and all of their risks. Just imagine – gig economy workers and gig economy enablers all in one place and the captain is an insurer. If Amazon only focused on selling books and DVDs it wouldn’t be what it is today. If Google only perfected its search algorithms without introducing the Chrome browser, Gmail and Android it would look like Yahoo. In a digital world that’s all about convenience, platforms are winners. The gig economy is no side gig; it is a growing force just like e-commerce was back in the day. The only difference is that e-commerce has been claimed by Amazon, while the gig economy is still up for grabs.

With ~$14B invested in insurtech in the past 3 years, the reality is that a basic comparison site and puppets prove to be the best way to sell insurance so far.

There’s nothing strategic about a strategic investment or partnership – if it sounds like insurance, and it looks like insurance, it’s insurance. Hip names and cool technology can only get you so far when you’re selling such a low touch product. So what’s an insurer to do? Find ways to interact more often with consumers, and the gig economy presents that perfect opportunity.

Cake & Arrow is pleased to announce that our collaboration with NEA’s Member Benefits Corporation (NEAMB) on a redesign of...

Not Just Another Millennial Listicle

Five Millennial-related must-reads that will challenge everything you thought you knew about Millennials.   Written off as the lazy and...

Cake & Arrow is excited to announce the publication of  their latest white paper based upon the results of a survey they...