Lemonade has recently announced a $300m Series D round led by SoftBank Group with participation from Allianz, General Catalyst, GV, OurCrowd, and Thrive Capital; bringing its total funding to date to $480m and its value to more than $2b. Lemonade’s $2b valuation sets the path to an IPO where a company’s valuation is more of an art than science.

In August 2016, The New York Times reported that Lyft held talks with General Motors, Apple, Google, Amazon, Uber and Didi Chuxing, as the ride-hailing company was looking for a buyer. At the time, Lyft was valued at $5.5b (post money) and had $1.4b in the bank following a $1b investment closed earlier that year. Less than three years later, Lyft filed for an IPO, pricing its shares at $72 each, which valued the company at ~$24b. 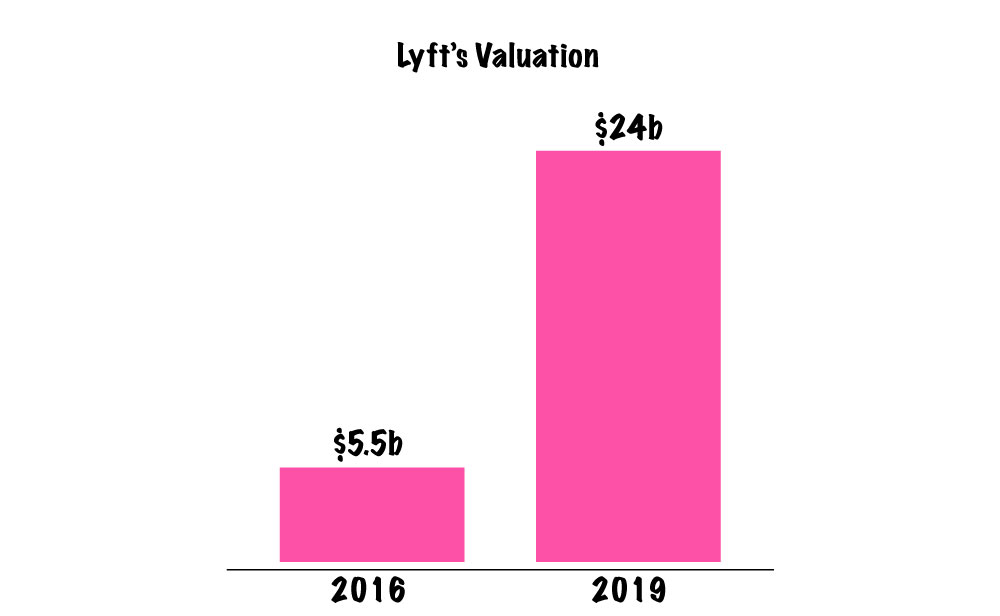 The Age of Alternative Metrics

When you don’t look good based on traditional metrics, you start to make up new ones. Back in 2016, when Lyft closed a $1b round, the company outlined their achievements that made them the fastest-growing rideshare platform in the US:

– The company completed 7m rides per month in more than 190 cities;

– reached an annual gross run rate of $1b; and

– surpassed more than 40% market share in San Francisco and Austin.

And if that doesn’t paint a pretty pink picture, Lyft released several “economic surveys” to show how passengers save time, money and boost local spending because of ridesharing. For example, Lyft reported that the local Chicago economy will see an extra $68.2m in 2016 thanks to the availability of Lyft. “Based on survey results from tens of thousands of Lyft users, we found that Lyft creates a significant positive economic impact in each of the twenty metro regions we have studied. Passengers have responded to the significant time savings and enhanced mobility Lyft provides by visiting local businesses more often, staying out longer, and exploring new areas of their city that are otherwise difficult to reach.” – Bill Lee, Senior Partner at Land Econ Group, which conducted the surveys on behalf of Lyft. 2016 was also the year Lyft lost $682m, but we’re living in the age of alternative metrics.

In one of their transparency chronicles from Sep. 2018, Lemonade’s Daniel Schreiber shared the company’s ‘Automation Index’ which tracks the ratio of customers to team members. At the time, the Index was 2,500 based on ~100 team members and over 250k customers. And to paint a pretty pink picture, Schreiber displayed Lemonade’s Automation Index in comparison to large insurers. 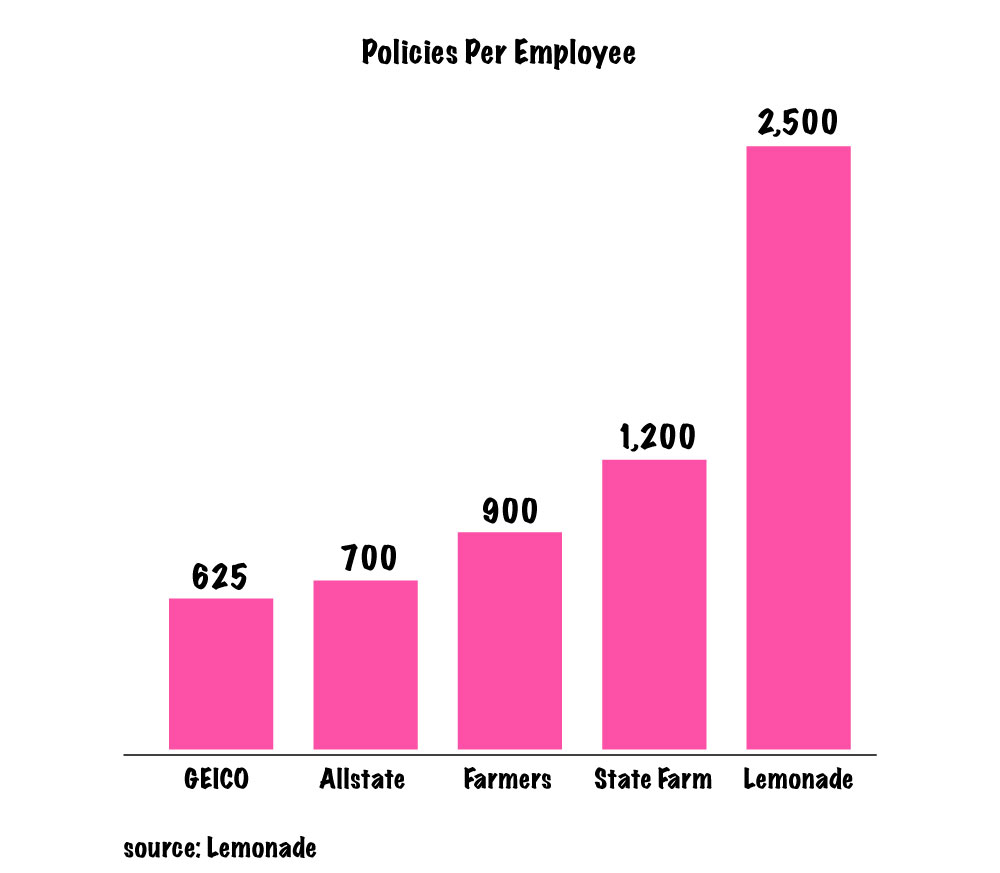 In their funding announcement, Lemonade shared that it sold 500k policies so far. Assuming they have 500k policies in force, their Automation Index now stands at ~3,165 based on 158 employees. In Lemonade’s standards, the company is growing and doing so efficiently when compared to other insurers. 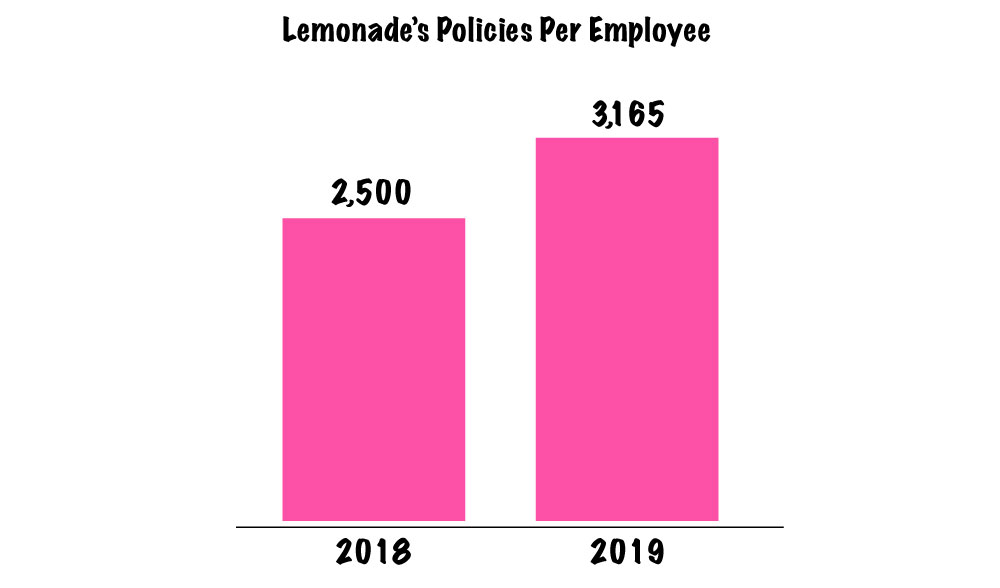 But to compare apples to apples in a world ruled by digital platforms with multiple offerings is a grave mistake. If we use Lemonade’s Automation Index to analyze Acorns, a fintech startup with less than half of Lemonade’s funding or valuation ($207m and $860m respectively), we’ll find that their Index reads ~14,000 (4.5m customers/321 employees) which is ~4.5x greater than Lemonade’s.

In 2017, State Farm reported a combined underwriting loss of $6.5b on earned premium of $63.9b and ended the year with a net income of $2.2b. That’s one of the benefits of old money. By definition, old money means inherited wealth – something Manhattan’s Upper East Side is filled with. Old money is the engine of today’s insurance behemoths, which are reaping the fruits of the wealth they’ve accumulated long before costly clicks and unconventional competitors became the norm. One of the ways to compete with old money is to be unconventional, and of course, being unconventional has an expiration date. Lyft was able to make it just in time to be considered an Uber competitor. And although the company was and still is behind Uber when it comes to market share and valuation, and despite huge losses, it delivered a pretty great payday for its investors.

While Lemonade and Lyft share a few things in common – like a pink logo, great PR, and the use of alternative metrics, there is one thing that sets them apart. Unlike Lyft, Lemonade doesn’t offer an unconventional solution. Aside from a slick UI, a fair or fairly low price point, and an ~automated claims experience, the product is still the same. And when the product is the same, the challenges are the same. However, that didn’t stop Lemonade’s investors from agreeing on a valuation that’s ~35x the company’s 2018 revenue, or 20x its 2019 revenue if they hit their $100m goal. For comparison, Allstate’s 2018 revenue was ~$39.8b and its current market cap is ~$32.4b, which means that they’re trading at ~0.8x their revenue. And if we go beyond insurance borders, we’ll find that Alphabet is trading at ~6.2x its 2018 revenue (~$136.8b revenue/~$860.9b market cap) and Facebook is trading at ~9.1x its 2018 revenue (~$55.8b revenue/~$510.5b market cap).

For some people some things are hard to digest. From day one, select industry experts held Lemonade to traditional insurance metrics, while the company talked about things like ‘Automation Index,’ ‘precision underwriting‘ and a whole new insurance model. In the age of alternative metrics and easy access to media, low performing companies by traditional standards can still win over the crowd, which may or may not be educated on a particular market. Lyft, which stated in their IPO filing that they may never make a profit, was able to make several investors very happy. Sean Aggarwal is one of them. The former CFO of Trulia invested $30k in Lyft in 2007 and now has a stake worth $100m. So while Lyft’s mission is to “improve people’s lives with the world’s best transportation,” their other mission is to deliver a return to their investors. So get ready for another pink roadshow because Lemonade is here to win the crowd.

A look at Lemonade Car in Tennessee