Earlier this month, Shefi first presented “Insurance Under the Influence” at OnRamp, to later present the same topic at AIG. The presentation, which you can download here, talks about several external factors affecting the industry. One of the biggest factors is the transition from a commission-based model to a click-based model .

The PPC (pay-per-click) model first appeared in the mid-1990s. The first documented version of a PPC model was in 1996 by a web directory called Planet Oasis, which was designed and marketed by Ark Interface II, a Seattle-based Packard Bell NEC unit. Planet Oasis introduced a graphical interface resembling a virtual city, where buildings would feature different logos of different websites. 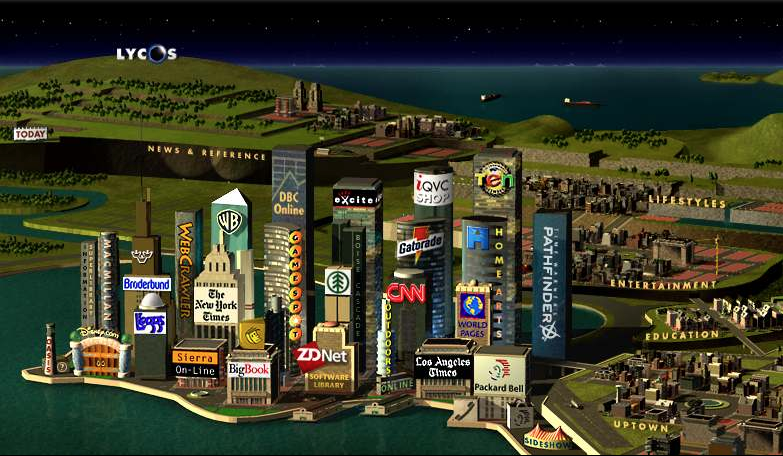 The directory was launched with close to 200 websites of companies that paid to be featured in different areas of the virtual city. Companies who appeared in the directory paid based on location; “Downtown” was considered a prime location costing companies like Time Warner, The New York Times, CNN and Yahoo $10,000, with other locations costing $3,000. Planet Oasis introduced the first version of the directory after a collaboration with Packard Bell, in which the directory was built into new Packard Bell PCs. For the price, companies would get bundled in Packard Bell PCs for seven months – a period of time in which the PC maker committed to ship over 1 million PCs. Paying so little to access so many new home PC owners was a great deal, and it offered companies a new kind of advertising that wasn’t available elsewhere. But then Ark Interface shared their future plans for including a PPC version (they called it pay-per-visit), which raised concerns among companies who signed up for the first version. However, by the end of 1997, over 400 brands were paying between $.005 to $.25 per click plus a placement fee. In between, a few other companies offered a PPC model, and in 2002 Google introduced PPC via their AdWords network. Fast-forward to 2018, Google and Facebook, which are both known for their click-based models enjoy over 60% of the total digital ad spend.

If Herb Cohen had a dime for every time commission-based job ads used the term win-win, he would open an account with Dime Savings Bank.

The man who coined the term win-win in 1963, provided companies with a commission-based model a much needed philosophy for recruiting sales people. Those were the good old days – especially for a product like insurance that everyone needs. So good companies didn’t consider investing a “few dollars” in equipping their salesforce, yet they certainly encouraged sales people themselves to spend: “Do not hesitate to spend the few dollars that it will cost to dramatize the work already done. The money spent for nicely printed reports, presentation folders personalized with the Client’s name, and for a combination lock policy box or an imprinted policy wallet will come back a hundred fold!” – quoting a sales guide from 2016 used by a well-known insurer with a commission-based model.

Mike Tyson said that everyone has a plan till they get punched in the mouth. But unlike Mike Tyson’s powerful punches, insurance companies with a commission-based model didn’t get hit with force, as technology gradually took over . It resembled little punches here and there as described by the same sales guide: “Reaching suspects, prospects, or clients by phone is becoming increasingly difficult. In this case, the technology of voice mail, caller ID, receptionists, and No Call lists works against us, not for us.”

This is where a determined commission-based salesperson comes in handy. The best part? Companies don’t pay for attempts that fall short. But there’s more. Ask five different sales people what they do when they hear a no and you’ll get five different answers. A determined salesperson has the ability to overcome different objections, which is vital for a product like insurance. Online doesn’t work that way. When potential customers have an objection they usually hit the X button and move on. The worst part? Companies pay for every attempt, sometimes even more than once.

Online shopping today is all about consumers. Back when we accessed the internet via dial-up, most of us didn’t have the luxury to browse around – we had a mission and time was our enemy. Today, unlimited internet plans allow us to take our time. It took me 3 weeks to buy flip flops online with all the options out there. I wanted something different and after purchasing and returning 3 pairs, I settled for a pair of Havaianas. The whole process made me feel guilty. I couldn’t help but wonder how much I’ve cost in clicks and shipping. This is a classic win-lose scenario; Google won, Amazon (and a few others) lost. And in case you’re wondering, Amazon is trying to solve this with Amazon Wardrobe, as it costs more to ship two – 2 pound packages than one – 4 pound package.

Let’s talk about what impacts the process of selling insurance online.

The rise of the savings generation

Money management apps, which encourage people to be in control of their finances are the latest trend. And just recently Goldman Sachs acquired Clarity Money, which raised $14.5 million and has 1 million users.

If that’s not enough, you can always count on news platforms like Forbes to help consumers save on insurance. The result? A new breed of consumers that are constantly hunting for cheaper deals online.

Unlike shopping offline where consumers had to put in an effort and deal with emotions, the digital world offers an effortless, emotionless platform. There’s no guilt, there’s no pressure, and there are tons of options. The result? Consumers live by the it doesn’t hurt to ask phrase while hurting those who respond.

You need a lot of creative in your distribution strategy