Jerry Fox, HawkSoft’s VP of Carrier Relationships, began his insurance career in the 1980s when he first worked for independent insurance agency Holm & Associates, which was subsequently sold to Wells Fargo and became the commercial insurance division of the bank. As Fox will go on to tell me, that was the big story back then.

Fox was no stranger to the industry, as his father worked in insurance until the early 1960s before moving on to a career in social services. Fox’s uncle owned and operated an insurance agency in Bloomington until 1978, when he sold it. In some ways, Fox’s career was aided by his family connections, as a lot of his uncle’s clients followed him. “I sold very little life and even less health,” he explained in an interview, adding that his primary focus was and continues to be the property/casualty side of the business.

Nobody chooses to work in insurance, and Fox is no exception. He moved on to another agency, James M. King & Associates, after a year and a half with Holm
& Associates and continued to work as a property/casualty agent until 2009, when he sold his firm to his partner. In the interim, he chose a profession in ‘insurtech’ even though the term was coined years later – first, when he participated in the purchase of his agency’s new Vertafore AMS system in 1984, second, when he became passionate about insurance raters, and third, when he continued to act as the liaison between agents, vendors, and carriers.

The 1980s were the early years of agency management systems, and most systems were “accounting-based.” While several management systems provided policy management and client management features, the accounting component was the most important for the agency. Fox began attending his local group of AMS users in Minnesota in 1985, volunteering to become treasurer while also teaching classes – first locally, then nationally. His subject matter was Vertafore’s Pathfinder system, one of the first personal computer-based, full-functioning agency management software. “They were using Windows 3.1 and worked on a dumb terminal.”

Change is constant and these glorified accounting systems have become more functional, improving some parts of the business. One organization that looked to drive this change was ACORD, which was formed in 1970. Originally known as Agent Company Operations Research and Development, the non-profit was busy producing standardized forms because some insurance companies used up to 15 different forms and agents were left to choose the proper one. “You had a shell policy since there was nowhere to upload documents into the AMS. There was no ‘Download’ back then, so agents had to load the information manually,” Fox explains, referring to the process of feeding data directly from the insurer’s system of record onto agents’ management systems. “Data was a major issue,” Fox recalls. “Not the security as it is now because there is so much, but the fact that there was none, and so servicing your customer was a pretty difficult process.” After a while, you started getting data into the system in small chunks, concludes Fox. 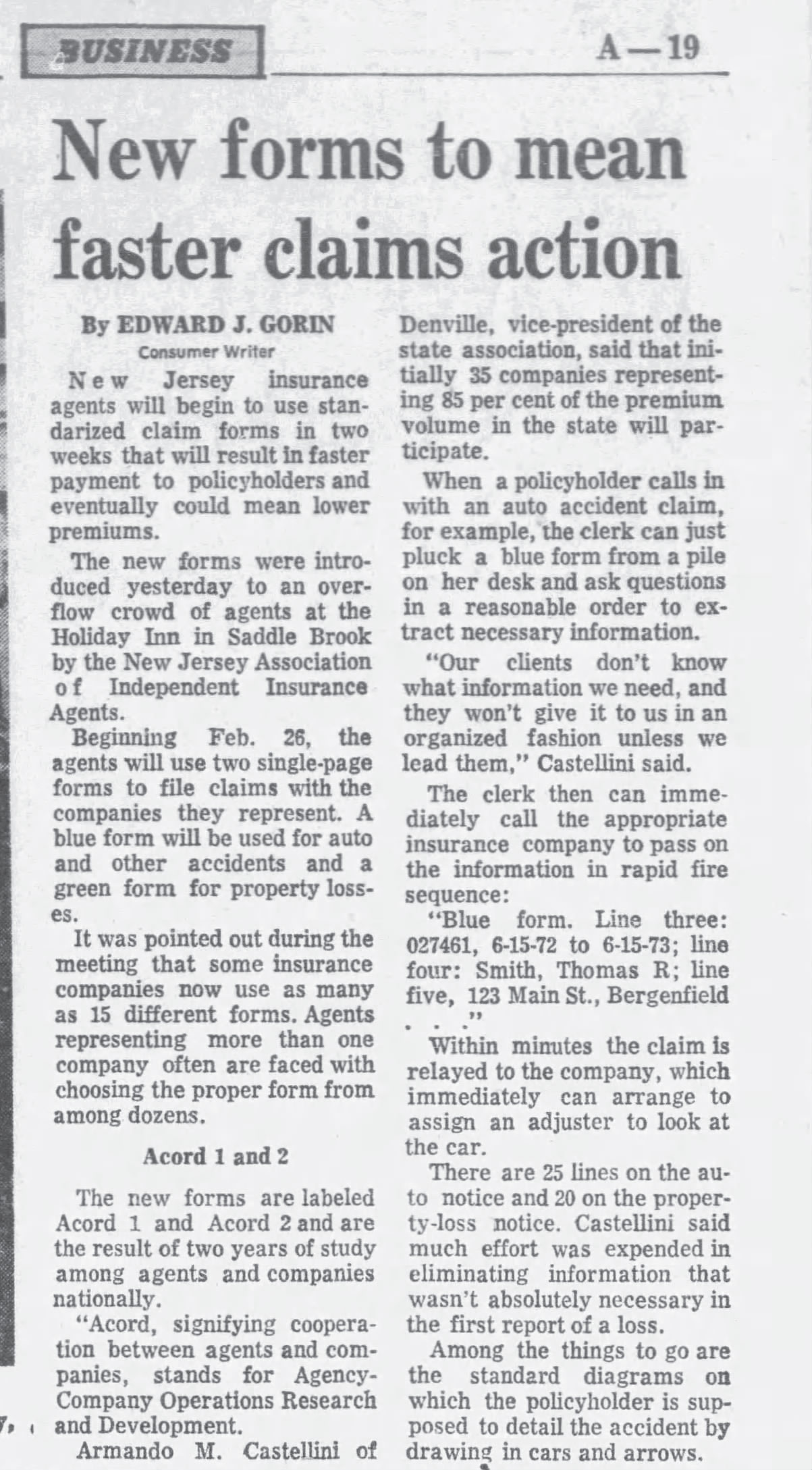 Another step forward was the introduction of insurance raters, or SEMCI, in modern language. This was right around the time Fox first met Doug Johnston from Applied. Johnston, who is now retired, was the former VP of partnerships and industry relations at Applied where he had worked for over 34 years. During his early career, he worked to improve the operation of Micro-Magic, one of the first insurance raters. To back up a little, there’s another Doug to mention… Doug Roller. 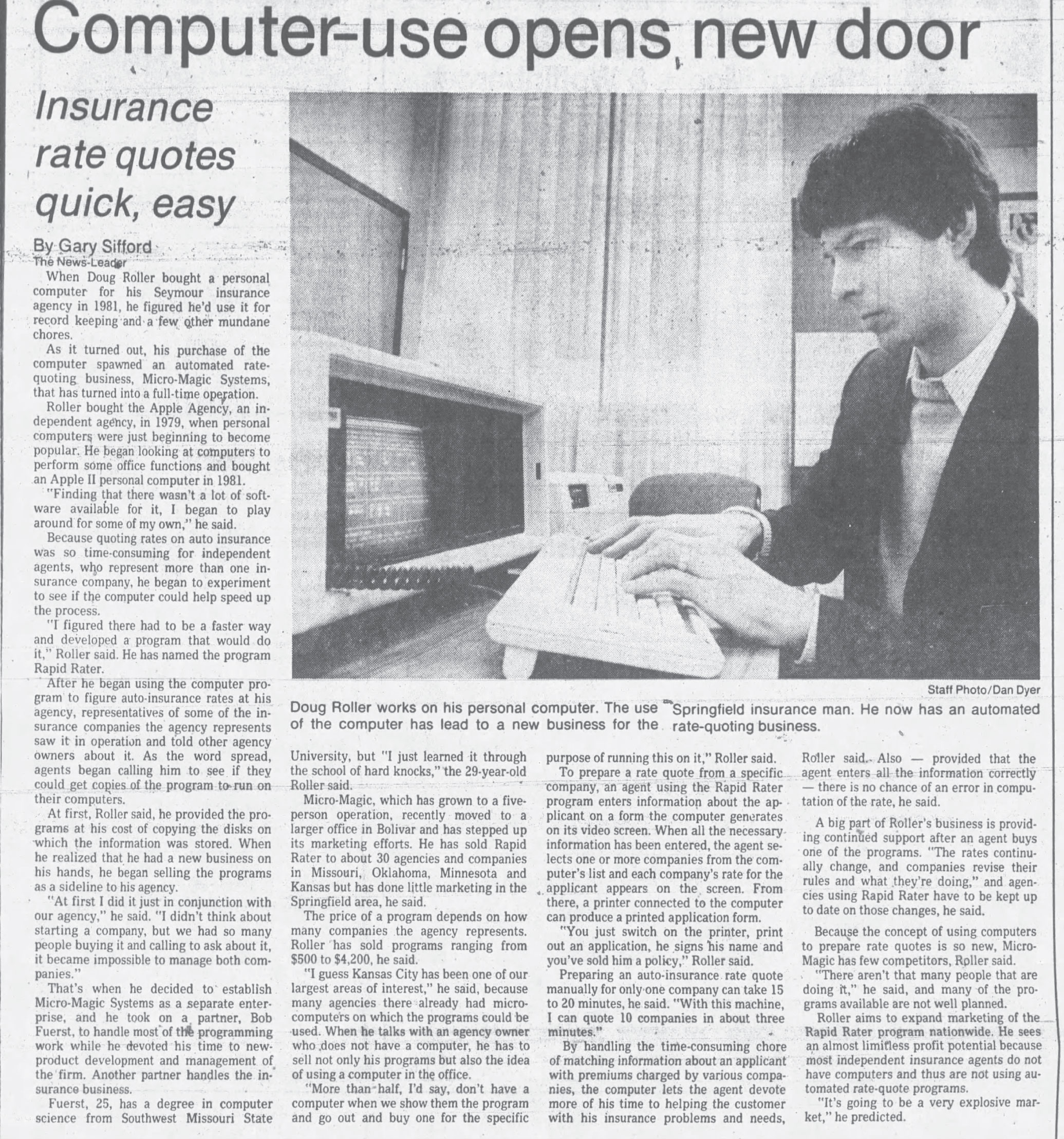 In 1981, Roller, an independent agency owner, acquired the Apple II personal computer. “Finding that there wasn’t a lot of software available for it, I began to play around for some of my own,” he said. Roller will later admit that there were more games than business at first, but he eventually found a use-case in the shape of an auto-insurance rating program called Rapid Rater, which would spit out car insurance quotes from American States Insurance Company and Travelers. This was the beginning of Micro-Magic Systems, a distinct company that employed about 20 people in 1986, when it was only available in a few states. That year, it was also sold for too little and too quickly to AMS. Point is, Fox was helping Johnston with his work on Micro-Magic.

That marked the onset of comparative raters. “My passion was comparative rating,” Fox explains. “I was running around the country, talking to agency groups about PL rating.” He went on to drive various research and development committees for insurance comparative raters, managing projects from start to finish and dealing with acceptance (opposition) from both sides of the coin – agents and carriers. “Carriers were saying we need more agents. Agents were saying we need more carriers to get on the platform.” This part, the underpinning of the chicken and egg paradox, has remained unchanged.

Insurance was a tough business. Nowadays, it’s just as difficult. “I love seeing the family piece of it – the 3rd and 4th generation coming into insurance. They’ve been there when their dad or mom wasn’t making enough money. There are still a lot who try to come in and say, man, I see this guy making big bucks. What they don’t see is the reason he bought the boat, and the cabin is because he had a good year in terms of contingency payments.” According to Fox, new recruits expect to make money rapidly. However, it is the long-term insurance folks who have grown their businesses over time that are currently making money. “There is no quick fix, as many people believe, because even if you buy a book of business, you will spend the majority of your revenue to pay it back.”

The final constant is the use of technology, whether it’s insurtech from the 1980s or today’s version, differentiated only by the number of zeros aligned to startup valuations and powered by investors’ funds rather than insurance insiders. Paul Hawkins, like Roller, is an insurance insider who first launched his own agency in 1990, to later turn his ambition of a tech insurance business into a reality. At HawkSoft, the philosophy is to raise the ocean and let all boats rise with them. The company earns money by selling its management system. Other add-ons such as the ability to text from the management system, when asked for by agents, are offered at a cost. It has found a niche among rural, local brokers who work with mutual carriers. Further, the average size of their agency-partners has increased from 5 to 8 people – in other words, the HawkSoft demographic is changing, and change is good. “HawkLink (by HawkSoft) is the most beautiful example of raising the ocean,” says Fox. HawkLink, offered at no additional cost, is a Google Chrome extension elegantly designed to export data to any site that comes up in Chrome. A good use-case for HawkLink involves exporting data to a premium finance website.

Phone calls and in-person signatures are no longer required to bind coverage. Transactional insurance is constantly consuming larger and larger chunks of relationship insurance. Where you’ll find relationship insurance, you’ll find independent agents, and to many, the living, breathing independent agency channel is a representation of an industry, uninterrupted. However, what you see is shaped by how you look, and you should always look back, but never stare. So, as you move up and forward to insurtech, it should be noted that it is becoming less and less about an industry-wide transformation and more and more about one’s choice of a profession.