Founded in 2018, Hokodo’s first offering was an invoice protection product that protects SMEs against non-payment of their customers. The startup then began offering merchants trade credit as a service, similar to the buy now pay later model. Today, Hokodo describes itself as a buy now, pay later solution for B2B. 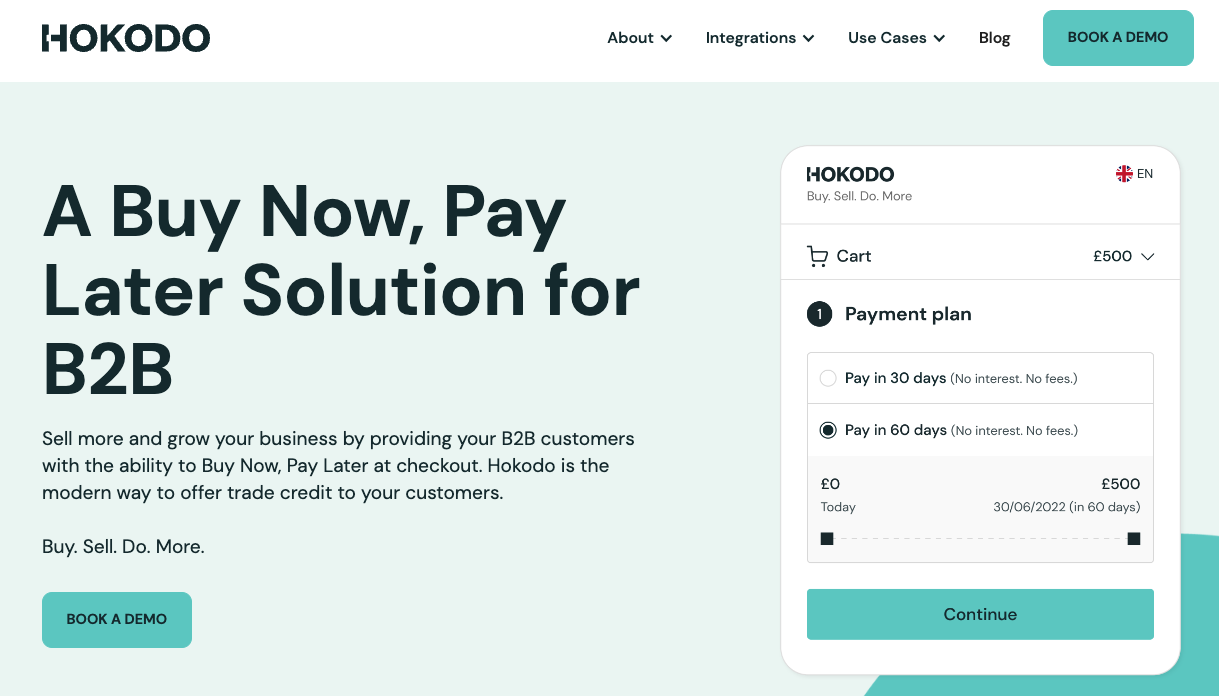 Hokodo’s solutions are backed by Lloyd’s of London via the Channel Syndicate, a unit of SCOR P&C. This gives customers protection against credit and fraud risks including nonpayment, ID theft and clawbacks, as well as insolvency of their customers.

“We’ve been following Hokodo since the beginning and made an initial investment as part of their Series A. We’re delighted to lead their Series B and double down on our support of Hokodo. There’s a lot of excitement around B2B Buy Now, Pay Later (BNPL) at the moment, and rightly so because the B2B e-commerce market is at least twice as large as B2C. We concluded that the capability and maturity gap between Hokodo and their competitors is enormous. Not only are they the only provider to offer pan-European coverage, but they’re the only one owning the end-to-end value chain. As a result Hokodo is the only firm able to deliver a cutting-edge purchasing experience across the continent.” – Patrick Norris, General Partner at Notion Capital.

“The B2B purchasing experience has long lagged behind its B2C counterpart, and business customers are calling for higher quality services as online sales continue to gain ground in B2B. Hokodo provides merchants with a truly real-time credit solution at checkout, driving up conversion rates and enabling all parties to buy, sell and do more. Hokodo is currently the only pan-European Buy Now, Pay Later provider in B2B, and this funding will allow us to continue our international expansion to enable 1 million businesses to access a better way to pay by 2025.” – Louis Carbonnier, co-founder and co-CEO at Hokodo.

“We’re the only BNPL provider that meets all requirements of B2B merchants, including credit scoring, fraud detection, payments, collections, financing and credit insurance. We don’t rely on any third party to make credit decisions as we can do it much quicker in-house. This means we can accept more buyers at a faster rate, which our merchant partners love.” – Richard Thornton, co-founder and co-CEO at Hokodo.

Founded in 2018, Hokodo's first product was an invoice protection product that protects SMEs against non-payment of their customers.

Shine serves over 50,000 freelancers and entrepreneurs who use the service to send and receive money, create invoices, and stay on top of administrative tasks.

Hokodo takes care of debt collection on overdue invoices, and if the debts can't be collected or the customer is insolvent, then Hokodo protects 90% of the invoice value.

Founded in 2014, Futrli provides supports to over 50,000 small businesses globally, and over 1,500 advisors and accountants, and integrates with popular apps and tools, including Xero and QuickBooks.