Insurtech is Not Well

Chicken soup for the savior

My thoughts on the implications of the Knip-Komparu merger announced this week:

Start with the customer

Knip was launched in September 2013. A digital broker funded by venture capitalists from the US, Switzerland, Germany, and the Netherlands who believe(d) in its mobile-first insurance management strategy. The Knip app is a mobile insurance manager that allows policyholders to track their insurance policies, premiums, and benefits, complemented with Knip insurance experts that are there to advise users on their policies, which will hopefully lead to a BOR, which will hopefully lead to Knip earning a fee on its service. But hope is not a strategy and complementary is yet to be proven.

The Knip and Komparu (a comparison-software provider) merger is described as a partnership that “combines two innovative InsurTech companies with highly complementary skills.” And yet any decent Competitive Marketing Strategy professor, and especially mine – professor John A. Czepiel – will tell you that people desperately seek synergies in the wrong places. There’s nothing complementary in this deal. Yes, there’s the potential for additional revenue because the newly created entity ‘the Digital Insurance Group’ just added a new revenue stream, however, the average Knip customer isn’t better off. Not to mention that the Digital Insurance Group is as generic a brand as can be. File under ‘an observation’.

Vice versa WeFox, which took a note from Knip’s playbook and launched its own digital insurance manager a year after Knip entered our world, also contributed its share to ‘insurtech breaking news’ when it announced the acquisition of digital insurer One that is set to launch by the end of this year. As it stands, One is built on the premise that ‘insurance is messed up’. In part, convenient. In part, unoriginal. Either way, the acquisition signals that the concept of mobile-first insurance managers as a solo-strategy is outdated. After all, the only thing new under the sun is that traditional incumbents are attacked by fair and fast coverage, not by freemium service. Measuring ‘downloads’ of an app in the hopes that it will translate to dollars earned reminds me of the story of Seattle-based, Craigslist-like P2P marketplace OfferUp, a company that is valued at over one billion dollars based on the value of the transactions flowing through its platform (~$14B), as opposed to its revenues (“the company has yet to make any significant money from its operations”). Thing is, in insurance, customer acquisition costs aren’t the only metric to note. You also need to consider a retention rate of 84%, on average. And if insurance is a zero-sum game, and in the long run – it most certainly is – then a BOR is that much harder to come by.

I spoke with Bolt founder Eric Gewirtzman this week. My ex-manager and the reason I could claim I worked for an insurtech company back in 2006, when I thought Travelers was king of the hill. Little did I know and I do digress. Like Komparu, Bolt was in the business of selling comparison software to insurers. But Bolt also had/has some of the sharpest brains in tech, which allowed it to provide IT support, ad-hoc projects and different types of distribution platforms to insurance players. Today Bolt is part a technology partner and part a multi-line digital broker. Given that the latter is self-explanatory, here’s an example that illustrates its value proposition as a technology partner: Bolt’s technology enables Progressive (‘the agency’) to sell homeowners insurance. Look. 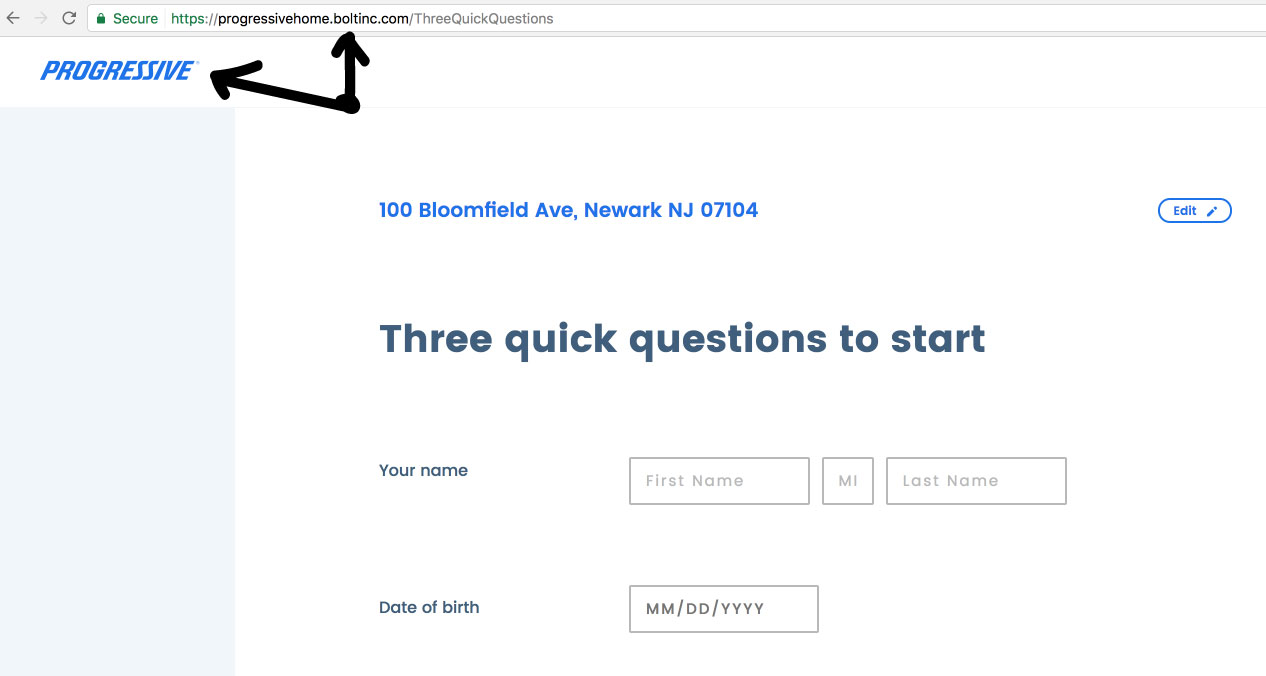 And so Bolt is powering Progressive. But to say that Bolt is also powering its digital broker arm is stretching it. Sort of like saying Komparu complements Knip without supplying any details in terms of ‘how’.

Lemonade…trust pays off and testimonials are a pain

Lemonade announced that three different policyholders asked to return money they had received from a claim payment. It also turned off Facebook Reviews, as did Geico, Allstate, and State Farm, at one point in time. Begs the question: ‘Lemonade on ice’ for when you can’t stand the heat of angry customers? All this to say, (1) this is the same order of insurance, (2) I am a Lemonade policyholder (disclaimer) and (3) angry insurance customers aren’t always right.

Guild is/was a Collaborative Fund-backed company that planned to create insurance solutions for the sharing economy. As did RiskGone, and as did Airbnb insurance. All are now defunct. Don’t…immediately see the connection between Knip, Lemonade, and Guild? As I write this, someone somewhere is contemplating the next ‘insurtech to watch’ dumb list. Please stop. Still looking for something to watch? Watch the ecosystem.

Same ecosystem, with a promise for different economy players

Things change. In insurance, it feels a lot like some chip at the market share of others over a long period of time. Rest assured, results follow, and where there are winners, there are losers.

About ‘winners’, Ad Age released Geico’s US measured media spending for 2016: $1.4 Billion. Doing some rough math – that’s $1.4B to acquire an additional one million policyholders, which comes out to $1,400 to acquire one (possibly soon-to-be-angry) customer. File under ‘Perspective’. That being said, aspirants, such as Metromile and Lemonade, are attracting a fraction of policyholders on a fraction of a budget. Why? Because policyholders shop. It’s what they do. Unfortunately, to us marketers, insurance is as rational a purchase as can be, and often the purchase, or lack of, boils down to awareness, followed by one’s perception for consumer surplus for the given line of business. Using digital to ease the process of purchasing coverage is easy, but using digital to educate on coverage is hard. Which brings me back to digital insurance managers. Educating on insurance post-purchase is the equivalent of test-takers huddling around the water cooler exchanging answers. Not me. I walk away. Which brings me to my last rational point.

Digital pundits with a love for people will rationalize the use of independent agents with ‘it’s a relationship-business’ followed by ‘advocacy’. And yet, insurance = contract = law, and the law is a precise endeavor. This is precisely why, when education and transparency go up, advocacy goes down and so will the need for insurance agents. However, just like the future isn’t evenly distributed, digital coupled with coverage clarity isn’t evenly distributed across products, or across players. So what does the future hold? A lot fewer players yet just as many people indifferent to insurance. Because as the saying goes…”the opposite of love is not hate, it’s indifference” – Elie Wiesel, who passed away exactly 366 days ago. RIP.

I never said I love insurance,