Aflac has announced it’s partnering with 4 summer music festivals: Shaky Knees, BottleRock, Faster Horses and KAABOO Del Mar to leverage the power of music and bring to life the next phase of its “Aflac Isn’t” marketing campaign and educate consumers about what Aflac is and when it is used.

“We know from our research that Aflac’s target audience shares a love of live music events, so we are excited to partner with Shaky Knees, BottleRock, Faster Horses and KAABOO Del Mar and bring new activations to these iconic festivals this summer that will help drive meaningful and memorable brand connections. At the same time, we are highlighting family fun – and family mishaps – that will undoubtedly occur throughout the summer through our new television commercial that explains when Aflac is used with a humorous side of summer slime.” – VP of Brand and Creative Services at Aflac, Shannon Watkins.

At each festival, Aflac will host on-site experiential activations that will feature exclusive giveaways and activities to supplement the experience for hundreds of thousands of festival goers. Music lovers of all ages and backgrounds will have the opportunity to visit the Aflac Flock Spot, a central interactive hub for sharing in-the-moment music and content via social media, and a three-dimensional Aflac Help Desk designed to support the “Aflac Isn’t” educational campaign.

“Music has proven to be a vital instrument in building education and awareness . By marrying diverse cultural moments with unique experiences like the Aflac Flock Spot, we can further establish to a broad base of consumers how Aflac isn’t used when they may think it is and how it stands apart from other insurers.” – Director of Brand Strategy, Insights and Advertising at Aflac, Valencia Mitchell.

Also, to amplify awareness, Aflac, in partnership with iHeartRadio, will bring unique music discovery to those visiting Aflac’s activations through customized playlists curated for each event that mirror the musical genre of the respective festival. The playlists will air on-site and be available to the public after the event concludes for continued listening. Additionally, a festival-themed episode, “For the Record,” will launch mid-May to kick off festival season, setting the record straight on misconceptions about summer music festivals and Aflac.

It is anticipated that Zurich North America employees dedicated to the U.S. group life and disability business will transfer to Aflac.

The asset management subsidiary of Aflac Incorporated, announced it has entered into a definitive agreement to purchase a significant non-controlling minority interest in Varagon Capital Partners. 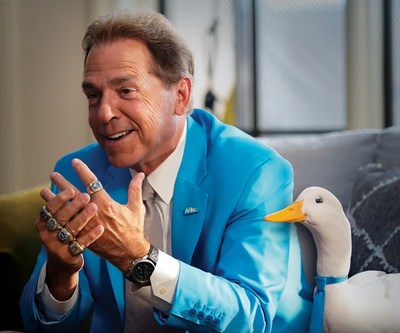 Coach Nick Saban Teams Up with the Aflac Duck

Aflac announced a “high-powered football-themed marketing campaign that is among the most integrated in company history.” The company will present...