“Obviously a good way to obscure the higher motivations, and to get a lopsided view of human capacities and human nature, is to make the organism extremely and chronically hungry or thirsty. Anyone who attempts to make an emergency picture into a typical one, and who will measure all of man’s goals and, desires by his behavior during extreme physiological deprivation is certainly being blind to many things. It is quite true that man lives by bread alone-when there is no bread. But what happens to man’s desires when there is plenty of bread and when his belly is chronically filled?”

Abraham Maslow was an American psychologist who introduced the hierarchy of needs concept, which suggests that people are motivated to fulfill basic needs before moving on to other, more advanced ones. Unlike others in his field who became successful by analyzing the negative side of humans, Maslow chose to focus on the potential of humans by trying to understand human motivation and the pursuit of happiness. And he himself was motivated; “If I were dropped out of a plane into the ocean and told the nearest land was a thousand miles away, I’d still swim. And I’d despise the one who gave up.”

Motivation is a tricky business. On the one hand you have people leaving great jobs with great benefits, and on the other, you have people willing to give up their lives for their country for ~$20k a year. In 1977, Arthur L. “Art” Williams Jr. founded A.L. Williams, the precursor to Primerica, and shortly after, he conquered the US life insurance industry with his army of motivated part-time insurance agents. In 1984, Mass Indemnity, whose policies were sold exclusively through A.L. Williams, surpassed Prudential by selling $38.3 billion worth of new individual life insurance, compared with Prudential’s $38 billion in sales for all types of life insurance. In 1985, it issued $65.6 billion in new coverage, against Prudential’s $46.6 billion. This success made A.L. Williams the world’s largest producer of individual life insurance.

Born in 1942 in Waycross, Georgia to a middle-class family, Art’s dream was to become a football coach and he spent seven years coaching the Columbus, Ga., high school football team and was twice named Georgia’s coach of the year. In 1965, Art’s father died, leaving his family with very little money from the whole life insurance he had owned. A few years later, Art was introduced to term life insurance – a product which back then wasn’t popular in comparison to whole life. “The life insurance industry has ripped off the public by complicating what is really a simple business – protection of the family breadwinner,” Art said in an interview with the New York Times. “It’s a national tragedy. That’s why most Americans think people who sell life insurance are scum and low-life.”

Art attributes his success to luck and being in the right place at the right time. But luck favors the prepared mind. Aside from choosing a product that sells easier, Art also introduced a new kind of insurance sales force – one that is mostly made of part-time agents – as he believed that hiring “good people” to sell life insurance full-time was impossible. “Folks do you understand, they can’t hire good people to sell life insurance full time, you can’t do it! Every public opinion poll ever taken about the way the American public feels about business at bottom of the totem pole is sharecropper, shoeshine boys, politicians and insurance agents. The turnover rate shows 85% or 90% of those people gonna fail after 3, 4, or 5 years. How many men and women that got responsibilities out there are gonna go to work with so much odds against you?”

Art sold the dream of becoming financially independent to 90% of the American workforce that “hated their jobs,” and timing was on his side. During the bad economic conditions of the early 1980’s, A.L. Williams agents showed people how to get cash they had in whole life policies, while affording to buy more insurance through term policies the company offered. At one point, A.L. Williams had 200,000 agents and out of those 175,000 were part-timers. However, the dream didn’t come true for most – the entire sales force had an average of under 2.5 sales a year per agent, yet the dream is still alive.

Staying true to its origins, Primerica is selling the dream of becoming financially independent to its commission-based sales force of mostly part-timers.

With a business model that “can be the subject of negative commentary on website postings, social media and other non-traditional media,” and emphasis on motivation – the company used the term 23 times in its 2018 annual report – Primerica had a sales force of 130,736 licensed life insurance agents as of 2018. But despite having a massive sales force, in 2018, the company issued 301,589 new insurance policies – an average of 2.3 policies per agent which is very close to the A.L. Williams era. 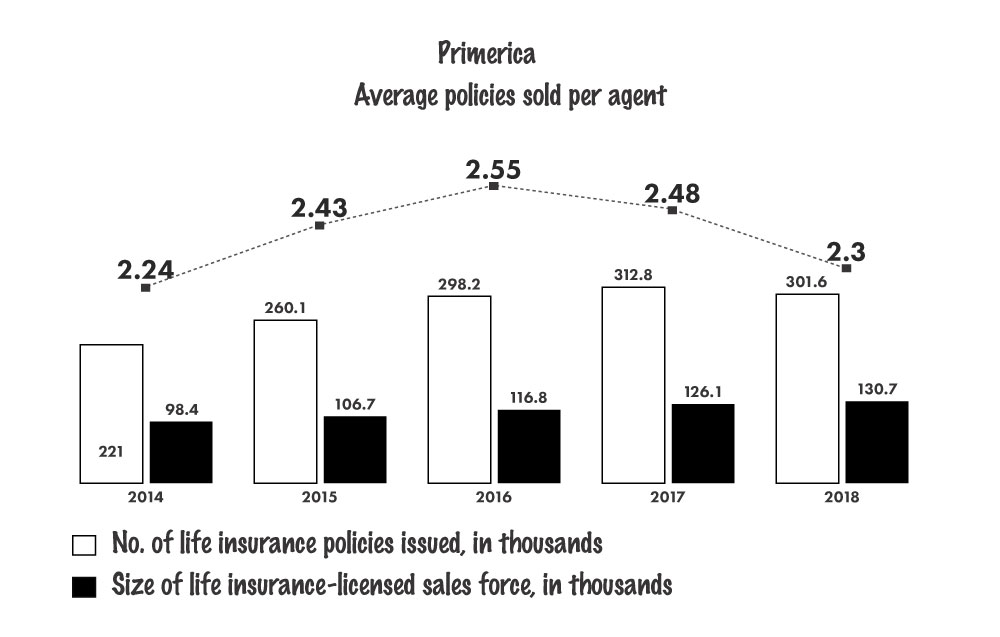 In addition, Primerica is seeing a significant number of terminated policies in comparison to new policies in-force, which could be an indication of a client base that’s loyal to recruits (Primerica experiences a high turnover rate among part-timers) and not the company. “Recruits may become our clients or provide us with access to their friends, family members and personal acquaintances,” the company states in its 2018 annual report. 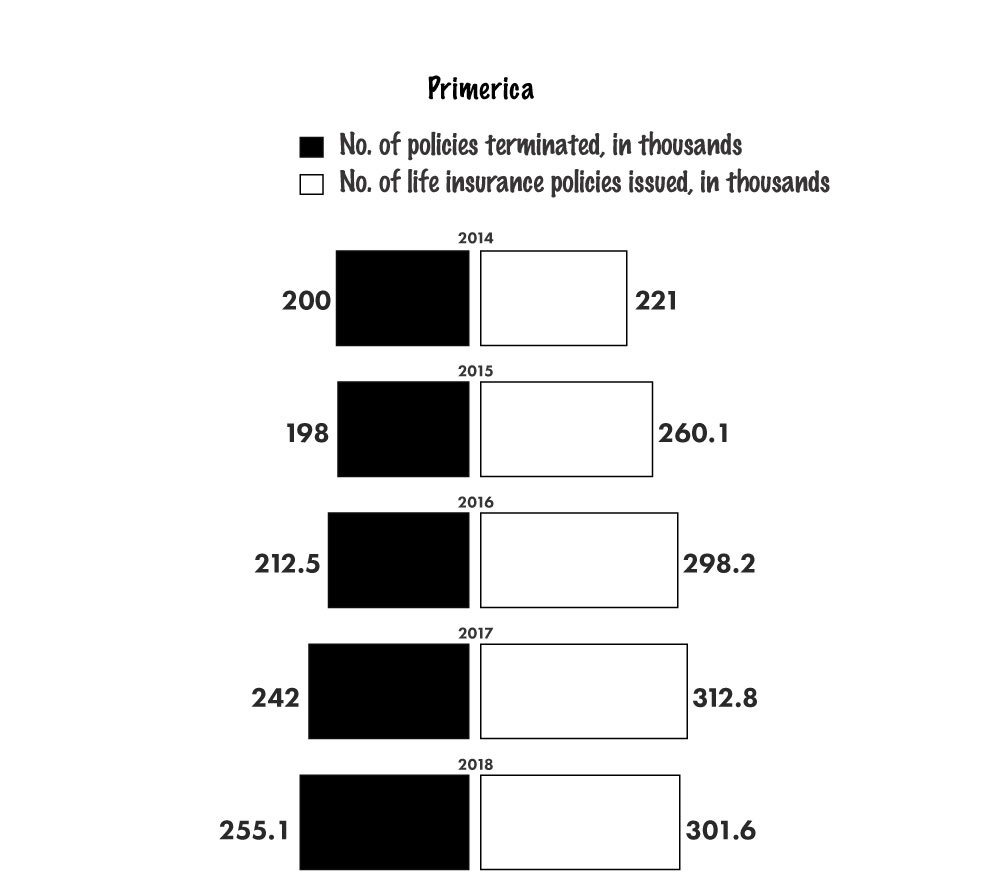 Horses have both monocular and binocular vision. As a result, humans started to use blinders while riding horses or using them to pull wagons to keep them focused on the road ahead. Some life insurance companies are like horses with blinders – only looking ahead without seeing how the world around them is changing. And this mentality is passed along to agents and financial advisors, which is why companies like Northwestern Mutual specify the type of different backgrounds they want in their job ads such as former athletes and military folks – those that follow the game plan.

If life insurance companies would look around, they would see that motivation has its limits in today’s world of distractions. Recruiting becomes challenging when potential candidates can easily find everything they need via Google and Glassdoor. And most of those that are already in it are experiencing motivation on one end and frustration on the other.

Unlike with most life insurance companies relying on a commission-based sales force, motivation isn’t the driver for companies that believe in their products; Progressive hasn’t used the term once in their 2018 letter to shareholders. So while some life insurance companies sell their heritage, experience and superior products to attract recruits and motivate their salesforce, reality is, they don’t believe in their products enough to sell them directly to consumers.